For more than four years eurozone countries – prodded by Germany, the European Central Bank and the EU bureaucracy in Brussels – have stuck to the twin ‘cures’ of austerity and structural reform as their response to the havoc caused by the 2008 global financial crisis.

Persuasively promoted by economists, international organizations and the mainstream media as the panacea, austerity and structural reform have been actively pursued by governments. Four years on, the effects are too painful to ignore.

Austerity on the back of the massive shock generated by the financial crisis has further depressed consumption and investment. The eurozone as a whole is teetering on the brink of an unprecedented triple-dip recession, while deflation – despite the ECB’s denials – is taking hold in much of Southern Europe.

With nominal GDP on a falling trend, denominator effects have led to an unstoppable expansion of debt/GDP ratios (see chart below) despite the squeeze on public budgets and the ECB’s relatively successful attempt – over the past couple of years – at bringing intra-eurozone interest rate spreads back under control.

Contrary to intentions – but as warned by critics of austerity – the mix of tight fiscal policies and a reluctantly easier monetary policy has failed to kickstart economies which had never properly recovered  from the devastating impact of  the financial crisis. What such a contractionary mix has caused, instead, is shrinking production bases – with countries like Italy, Spain and Greece losing more than a quarter of their industrial sectors (see chart below) – high and entrenched unemployment, and a further deterioration of debt burdens: in short, failure on a massive scale. 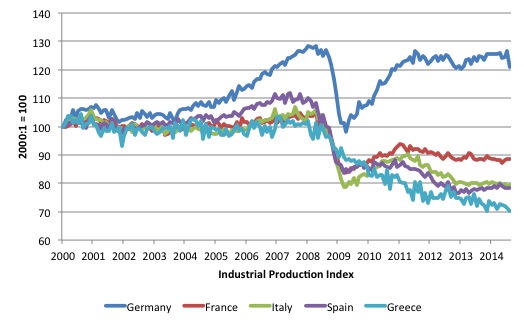 As for structural reforms, the whole European periphery – comprising the less rich and less productive countries in the euro area – has experienced what it means to try to force through sweeping change amid self-imposed austerity and a general unwillingness to invest. Only the most simplistic and draconian measures – like cutbacks to transfers or reductions of workers’ rights – have found implementation, often on the back of misleading government campaigns portraying the changes as ‘progressive’ moves toward a more inclusive society, in line with the best European standards. Supposedly inefficient safety nets have been dismantled, without anything being built to replace them so as to innovate rather than destroy Europe’s social model.

The end-result, quite predictably, has been a dramatic surge in inequality. The middle class – the bastion of Western democracy – has been squeezed to the point that political stability is now threatened in several countries amid the rise of extremist or populist parties, while society’s more fragile members have been pushed out to the fringes as part of a new, mushrooming underclass.

According to Eurostat, Europe’s statistical agency, a quarter of the EU’s population – or 123 million people – were at risk of poverty or social exclusion in 2013, a terrible indictment of the policies stubbornly pursued in the aftermath of the financial crisis.

And another set of statistics stands out as an equally poignant testimony of the wrongheadedness of Europe’s elites. The bitter medicines of austerity and structural reform were supposed not just to overcome a fiscal crisis but, above all, to re-launch a sluggish economy on the path to prosperity. A glance at the socio-economic outcomes for such a critical group as the young – those aged between 15 and 24 – provides plenty of evidence of how far Europe is straying from its goal.

Data published by the OECD (see chart below) show that the percentage of young people not in employment, education or training (the so-called ‘NEET’) is almost everywhere sharply on the rise, surpassing damning levels of one out of six in most of the European periphery and one out of five in Greece and Italy. The young are the most dynamic, creative, productive people in society, but Europe’s failed policies are turning them into a lost generation.